- July 19, 2019
With the big concert run of Les Miserables now under a month away the full cast has been announced.

This spectacular staging of the worlds longest running musical runs at the Gielgud Theatre for 10 weeks only this summer - next door to the Queens where the show recently closed for renovations of the theatre and where the show will re-open this December when the theatre is renamed the Sondheim Theatre.

Much of the lead cast has been previously announced; Alfie Boe as Jean Valjean (with John Owen Jones playing 3 performances a week), Michael Ball as Javert, Carrie Hope Fletcher as Fantine, Matt Lucas as Thénardier, Katy Secombe as Madame Thénardier, Rob Houchen as Marius and Bradley Jaden as Enjolras. 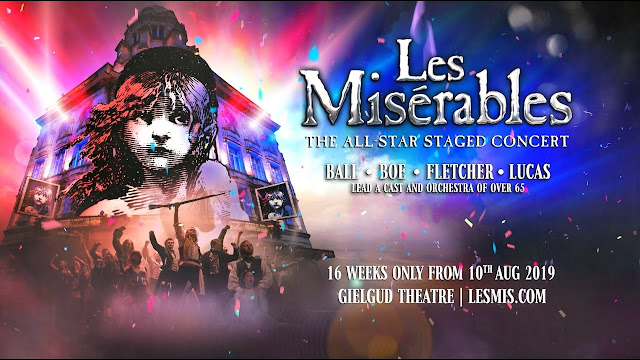 The much-celebrated musical includes the iconic songs I Dreamed a Dream, Stars, Bring Him Home, One Day More and many more.


Les Misérables is written by Alain Boublil and Claude-Michel Schönberg and is based on the novel by Victor Hugo. It has music by Claude-Michel Schönberg, lyrics by Herbert Kretzmerand original French text by Alain Boublil and Jean-Marc Natel with additional material by James Fenton and adaptation by Trevor Nunn and John Caird.
The concerts run at the Gielgud Theatre from the 10th August until 30th November 2019 - tickets are limited and are available here.  You certainly don't want to miss the theatrical event of the summer!