The Feeling at London's The Other Palace Studio

- July 14, 2019
The Feeling – A Comedy Musical Drama Portraying A Tale of Love, Friendship and Toxicity arrives at London's Other Palace Studio Theatre this September for 3 performances only.

Monsteers Artistry Ltd. may have only recently celebrated its one-year anniversary but already it is carving out a niche within the London theatre scene. It is a unique talent agency placing actors in the traditional way but also creating brand new shows to highlight in-house talent. One such show – The Feeling, written by the managing director of Monsteers Artistry, Kyra Jessica Willis, touches on love and human jealousy and the dark side of behaviour.

The Monsteers brand is uniquely different. There is a hands-on approach with Willis at the helm, collaborating with writers, artists and producers from all avenues of London theatre. The driving force behind The Feeling, Willis felt that she wanted to share a slice of life with the audience, to shine a spotlight on friendship, betrayal and intimacy. It’s a cleverly crafted musical drama that interlaces comedy with those darker elements.

Willis states: “I set up Monsteers Artistry because I wanted to make a difference in the industry by helping actors achieve progression but by also creating an inter-agency community for them. We started looking at self-produced work such as new musicals and plays as well as crafting a new spin on older productions to give actors the chance to also explore new avenues of creativity.” 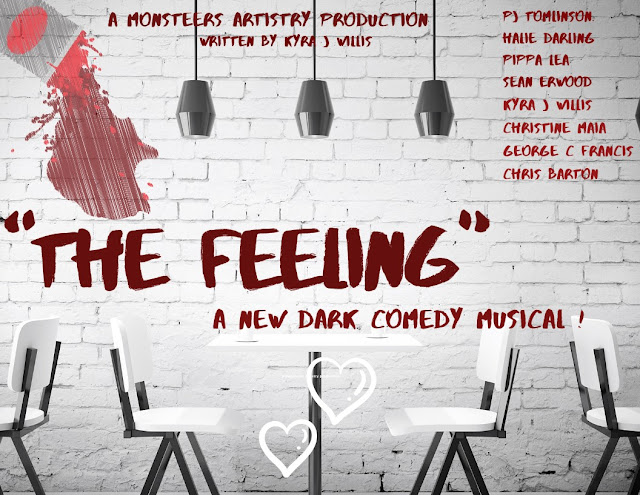 The Feeling is based at an iconic off-West End theatre - The Other Palace Studio – it portrays six friends who are all linked to each other through a series of events. As with real life, there is often an undercurrent when it comes to human nature and this is cleverly revealed through an evocative storyline and song. The writing is honest and sincere. It reveals the complexities of human behaviour as shown through a lens. There is the vibrancy and warmth of friendship, mixing it with an undercurrent of toxic behaviour blended in a way that will draw the audience into the resulting storyline.

Willis states, “I would term it a dark comedy musical drama and believe it will resonate with anyone who has endured a toxic friendship or relationship. It’s raw, it’s fun and it’s uplifting and yet, there is a definite glimpse into the uglier side of human behaviour.”

The Feeling has a limited run currently at The Other Palace Studio. Tickets are available through the box office for shows on Monday 2nd September at 8pm and on Saturday 7th September, the matinee performance is at 3pm with the final performance at 8pm. The show is suitable for those over 12-years of age accompanied by adults. Note, there is strong language and scenes of violence and sexual content insinuated. Monsteers Artistry Ltd is an ethical agency and this is only the first of many London theatre productions.