The Winter of Discontent

- November 22, 2019
Staged inside the Isham Dark Studio at Northampton University's Avenue Campus the 3rd year students have devised, written, designed and created a brand new production, The Winter of Discontent.

Telling the story of the public sector trade union strikes in 1979. With a labour government losing control and families being tested for money. This is a window into a tough world. Families crumbling under the strain, workers under pressure to fight for better wages. Considering work on this production only began 5 weeks ago the students have done a sterling job.

Their script is clever, full of witty lines, wordplay and moves the action along well. They've created a great array of characters and you can certainly emphasise with their journeys. 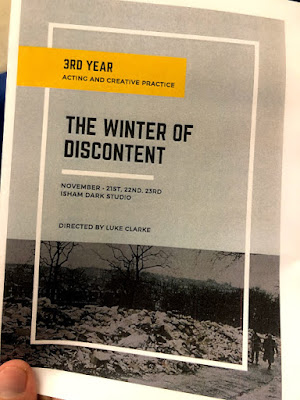 Jonathan Mansfield does a superb job as Fred Beech. His passion for the cause which leads to a divide between his partner and their baby. He carries the emotion of the role tremendously well. Libby Homer-Doyle matches Jonathan well as Rosie, she also has her own emotional journey at the hospital where she works. She struggles with the demands of nurse strikes and trying to hold the family together at the same time. That pain is etched throughout her performance.

The trio of Emily Ashberry as Prime Minister Jim Callaghan, Leanne Avery as Albert Booth and Jenny Dexter as Denis Healey do a great job, particularly in a scene involving a whiteboard in the first act.

Amongst the supporting roles, Craig Woods and Molly Tsingis stand out. The whole cast though gives great performances and the acting ability in this group of students is of the highest quality.

The student's design work is good too, the use of the cardboard boxes and litter bags works well. There's some really clever work on the use of entrances, especially in bins. It works really effectively.

Director Luke Clarke's direction and leadership allow the students to flex their creative muscles which they do well.

The students clearly haven't gone easy on themselves and this is a fantastic showcase of their talents and abilities, both as writers and actors. I genuinely forgot during the performance I was watching students and not seasoned performers.  I'm sure all the students will on to bright things if this show is anything to go by.