Behind The Scenes on The Boy in the Dress (Gifted)

The musical is a stage adaptation of the novel by David Walliams. Brought to life in an adaptation by Mark Ravenhill and with an outstanding musical score written by Robbie Williams and Guy Chambers. It combines humour with great warmth, a toe-tapping score and is a perfect show for all the family.

Our day began meeting outside stage door with some fellow bloggers and RSC Social Media Manager, Amy, who took us inside the building where we were greeted by the company manager, Robbie, who took us backstage for a look around.

We started in one of the change areas that are kept on either side of the stage. These allow the actors to change their costumes, wigs or make-up without having to climb back up to their dressing rooms which are upstairs. It was great details of the design work up close, Robert Jones has done a fine job designing the world the musical is set in - a modern-day England but also quite cartoon-like. 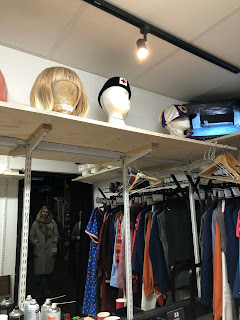 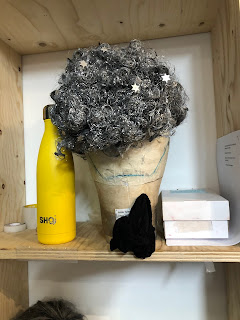 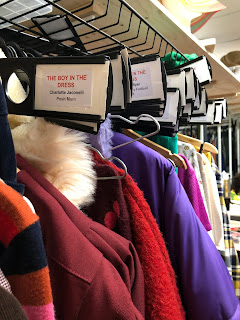 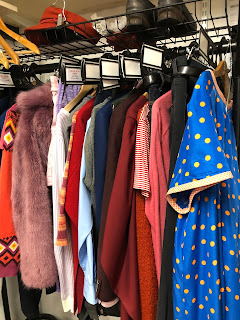 From this area, we entered one of the wings where some of larger stage pieces including some of the houses are kept. This is also where the car Daversh's mum uses in the first act. The car is electric and is driven and controlled by actress Natasha Lewis. 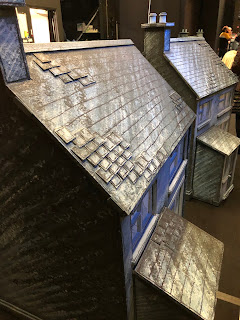 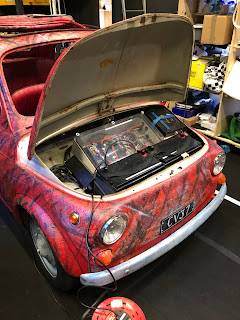 Also kept in this area is a large props storage where both big and large items are stored and ready for use in the production. The football sequences are superbly staged, whilst you may see some of the balls on sticks here you have to see the show to really appreciate the work the company in the scenes. I can't imagine a better way to stage a football sequence on stage. 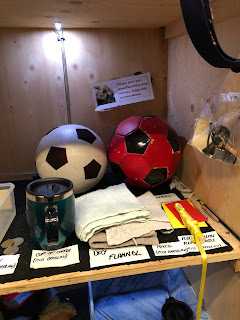 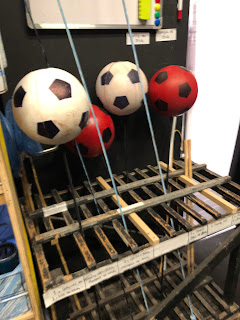 We then walked around the space behind the auditorium where the audience comes into their seats if they're in the stalls. If you've ever been the RST and sat in the stalls you will notice curtains as you walk to your seats. Behind these curtains are kept more of the stage props and also quick-change areas. In the photos below you can see the two shelf units from Raj's shop. 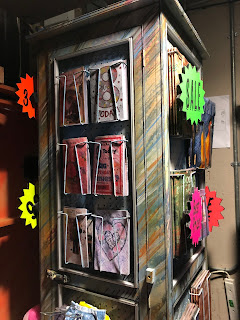 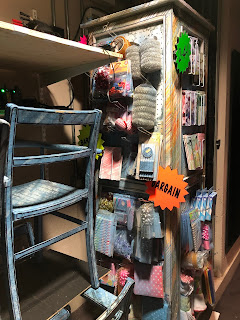 We then headed to the other side of the stage where more of the props and set pieces are kept. These included more of the houses, the funfair set for the act two number 'Beach Holiday Sunday'. There is another changing area for the company where more costumes, wigs and makeup is stored. Here we were shown the very important snot that is used in act one when Dennis has a cold during the football match. 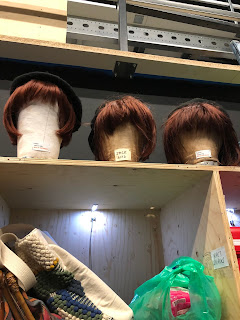 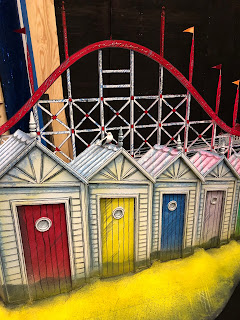 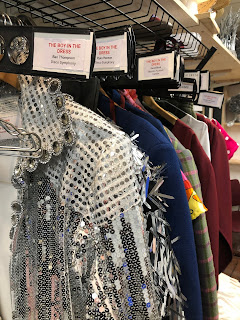 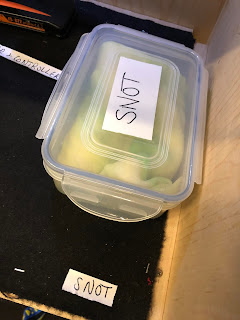 We were then taken on to the stage. We'd observed some of the stage crew vacuuming and moping the stage ready for the performance. They have to do this to make sure the stage mechanics work, even the smallest amount of dirt can could cause the mechanics to malfunction. There are a few bits of scenery stored under the stage which come up through the stage floor and from either of the wings hence some lines on the stage (as you can see on the stage floor). The RSC has a great amount of storage space, both behind the stage, to the sides and above. 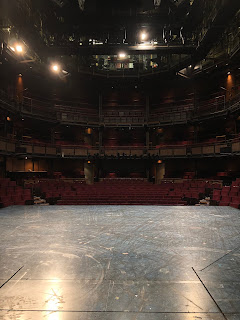 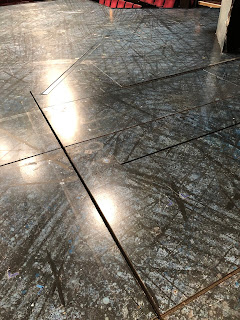 Whilst we were on the stage we were able to meet two of the stars of the show, Ben Thompson who puppeteers the dog Oddbod. Ben does such a superb job bringing Oddbod to life, so mesmerising is the puppetry that you honestly forget Ben is there controlling him. Ben showed us the controls that operate the head and tail and talked us through his the experience of working on the production. We had a lovely discussion about the children's reaction to Oddbod - as you can imagine they love him. 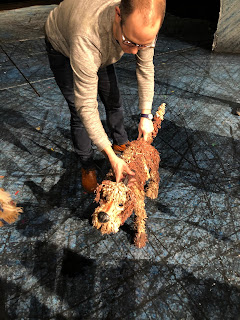 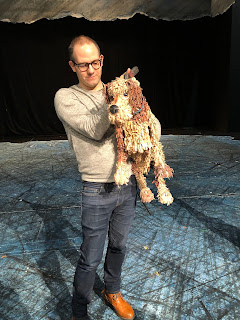 We rounded off the tour by seeing a couple more areas where they keep some of the set including Raj's shop. We were shown where the large glitter balls which feature in 'Disco Symphony' hang above the stage ready to be brought in. This concluded a brilliant look backstage on the production. Seeing the set and props up close really shows the detail and skill that goes into bringing theatre to life. All the staging and costumes are created in the Royal Shakespeare Company workshops and the craft that has gone into everything really pays off. 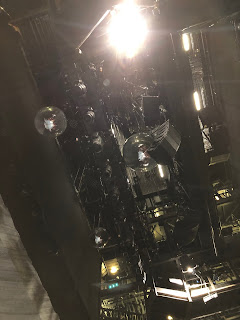 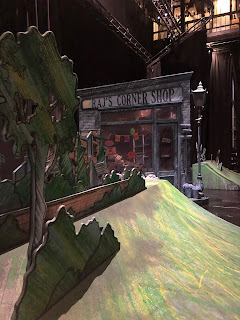 After the brilliant tour, we headed to the Rooftop Restaurant for lunch prior to the 2pm performance. We were given a couple of lovely keepsakes from the day which was really kind and we all decided what we were going to drink and eat. I chose the roast pork from the Sunday lunch menu and it was delicious. As a table, we all agreed around the table how tasty the food was. 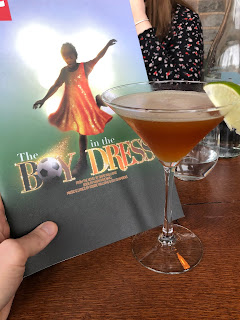 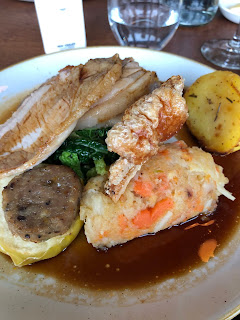 After the lovely lunch, we headed down to theatre for the performance. I've already reviewed the production on the press night (the full review is here) and gave it a richly deserved 5 stars but it's been a couple of months since I then and it has really strengthened. At the performance, Jackson Laing played the lead role of Dennis (a role that is shared by 4 boys). He was magnificent, a brilliant star in the making. Asha Banks shone as Lisa James, she has such a lovely vocal quality. Zachary Loonie as John and Arjun Singh Khakh as Darvesh were both superb too.

There are many great performances throughout the adult cast but to pick out a few; Irvine Iqbal's Raj is hilarious. Forbes Masson is perfectly cast as Mr Hawtey, none more so is this evident that 'A Life Of Discipline' in Act Two. Rufus Hound is touching as Dad. Charlotte Wakefield is a lovely actress to watch and she's effective as Mum and as Miss Windsor.

It was a joy and a privilege to get to watch this marvellous production and to get to see backstage. I'd like to thank Dean, Amy and Robbie from the RSC and to my fellow bloggers who it was lovely to meet, especially Emmie (please visit her great blog Carpie Diem Emmie) who it was wonderful to spend some time with, boy did we laugh and have a good bop to Disco Symphony! We even had David Walliams and Guy Chambers sat on the row behind us.

I wholeheartedly recommend you catch this 5-star perfect family production which runs at The Royal Shakespeare Theatre in Stratford-Upon-Avon until Sunday 8th March 2020. Visit http://www.rsc.org.uk/ to book or to find out more information.