- October 10, 2019
Emma Jane Morton is currently part of the original UK company of Amelie which is into its final 2 two touring venues. The show transfers to London's The Other Palace in November. Her previous credits include Sweet Charity (Watermill Theatre), Crazy for You (UK Tour) and Keep The Home Fires Burning (UK Tour). Now she's answered a few of our questions. 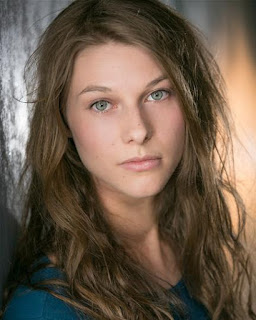 Q: Being in a musical (Amelie) which is adapted from a film, had you seen the movie before you auditioned for the role?
A: I actually watched it at school as part of French lessons when I was maybe 13/14 but we weren't allowed the subtitles. As my French was limited, I didn't quite understand the film at the time because I was too busy trying (and failing) to work out the translations as well at it is very quirky so I remember being a bit confused as a teenager! I rewatched bits of it during the audition process as I used some of the transcripts for a monologue to show my French accent. I don't think I have watched the full thing since school-maybe I will revisit it in the next break.

Q: I know the musical is in English but can you speak any French? A: Well, I did study French at school up to GCSE level. I was always much better at speaking/writing than the listening/reading side. I can't remember much of it now though-which is quite shameful. I am a great admirer of people who are bilingual! I sing quite a lot of classical music and sometimes sing in French--one of my favourites is Faure's 'Apres Une Reve' and translate it in my head when I sing it so I can act it, it isn't anything you could use in everyday conversation though.

Q: How was the rehearsal process for Amelie and working with director Michael Fentiman? A: Because I joined the tour cast and wasn't part of the original creation, I had quite a quick and different experience to those who began the shows life at the Watermill. From what I hear, the initial process was quite demanding with lots of changes and rewrites right up until opening and beyond to get the show just right!

Q: With the music (by Daniel Messé and Nathan Tysen) completely re-worked for the UK tour were they involved? A: I don't think they were part of the rehearsal as such but being the writers they always need to be consulted and approve of what creative choices are being made. They have been to watch both the smaller Watermill version and the Tour and have made some suggestions for when we take the show into London. So they are always involved!


Q: You've been in a few shows where the production has used actor-musicians. What challenges does this bring?
A: For me personally, I have only ever done one actor-muso show where the rehearsal process has been longer than a non-actor muso show (usually 4 weeks). So there is always the added pressure of doing an additional skill with no additional time so I tend to have to practice before and after rehearsals-you have to be quite disciplined in that sense. It's always learning the music off book that's the hard part. It doesn't matter if the score is easy or hard-I don't play by ear very well-so prefer the dots, as soon as they are taken away I can't even tell you the first note unless I have spent hours memorising. Some musicians are the other way round and prefer by ear, I am always jealous of their skills.

Q: You understudy for a few roles in the production. With the actresses you understudy playing different musical instruments to you, how do you go about as a company adapting the show and the music for these occasions? A: We are really lucky on this job with the musical standard of individuals being so high. It means whenever there is a musical track missing everyone chips in a little bit with any important lines. I can actually play (not very well) some of the other understudy instruments but of course, even if I was able to play the whole of 'Ginas accordion part' well, you would lose my flute line, which is also featured so it's just about balance and covering the important bits with the instruments we have. Rachel who plays the mum/cello is incredibly musical so she is so valuable at playing extra bits needed and Chris who is also an understudy has a confident ear for chords and seems to be able to hop onto anything which is amazing! I pitch in where I can!

Q: With the UK tour in its final weeks, how will you reflect on how the tour has gone? A: I love touring and I've had a great time. A lot of us have been to venues we haven't worked at before so that's been fun and performing for different audiences up and down the country is always interesting. The reactions to the show have been so wonderful and generous and we've loved performing for everyone so I would say that it has been a great success.

Q: Amelie is heading for London's The Other Palace in November (and running till February 2020). How excited are you to transfer the production there? A: I am sooooooo excited. This is the biggest show I've ever done in London so that's cool. I love touring, but I think it will be nice to stay in one place for a while-I'm looking forward to being able to do my washing whenever I want (he hee) and doing lots of classes in London. The venue is perfect for the show, there is a real buzz about it so I think it will do really well!